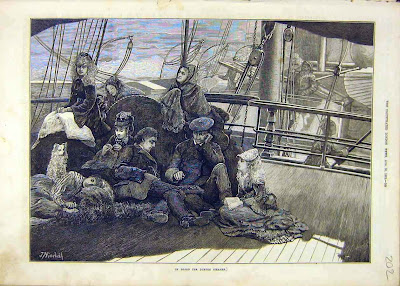 AN EXCURSION STEAMER SUNK IN THE TAY
by William McGonagall

'Twas in the year of 1888, and on July the 14th day,
That an alarming accident occurred in the River Tay.
Which resulted in the sinking of the Tay Ferries' Steamer "Dundee,"
Which was a most painful and sickening sight to see.

The Steamer was engaged by the Independent Order of Rechabites,
And all were resolved to see some rural sights;
And the place they selected was the village of Newburgh;
While each heart was happy and free from sorrow.

And the weather was sunny, and really very fine,
And 900 souls had agreed to while away the time;
And they left the Craig Pier at half-past two o'clock,
Never thinking they would meet with an accidental shock.

And after passing underneath the Bridge of Tay,
Then they took the Channel on the south side without dismay;
And Captain Methven stood on the Steamer's bridge, I do declare,
And for the passengers he seemed to have very great care.

And all went well on board for some time,
And the silvery Tay shone beautiful in the sunshine;
And the passengers' hearts felt light and gay,
While they gazed on the bonnie banks of the silvery Tay.

To do justice to the passengers, they were a goodly band,
For their behaviour, 'tis said, was truly grand;
But to the eastward of Newburgh, the Steamer was too close inshore,
And on passing a boatman, he warningly to them did roar,-

Warning them not to come inshore so near,
But his warning voice the helmsman didn't hear;
Neither the Captain or passengers his warning dreads,
Until the Steamer struck a number of boulders, known as The Heads.

And close to the point where the Pow falls into the Tay,
Which the people that escaped drowning will remember for many a day,
Because many of the passengers were thrown off their balance;
But, most fortunately, they were all saved merely by chance.

And owing to the suddenness of the shock, many women fainted away,
Which filled the rest of the passengers' hearts with dismay;
But they soon regained their composure when close to the land,
Especially when they saw that succour was near at hand.

The engines were kept going at full speed,
And God helped His people in time of need;
And in a short time Newburgh was reached,
While many women wept bitterly, and loudly screeched.

Because by this time the forehold was nearly filled with water,
Which caused the passengers' teeth with fear to chatter;
Because the Steamer was settling down forward,
While to land the passengers safe Captain Methven struggled hard.

But before one-half of them had got ashore,
The women and children were in a state of uproar,
Because the forepart of the Steamer was submerged in the Tay,
Which filled the passengers' hearts with dismay.

But, thanks be to God! all the passengers were sent to Dundee
By the Steamers Renown, Forfarshire, Protector, and the Lass o' Gowrie,
Which certainly was a most beautiful sight to see,
When they landed 900 passengers safe on the pier at Dundee.

Then, good people, away to the mountains, glens, and lakes,
And drink of milk and pure water, and eat oaten cakes;
And sit down on the margin of a little burn in the sunshine,
And enjoy yourselves heartily during the holiday time.

Much much more on the life and times of Mr McGonagall available here.

This is my backyard from my yoof and some of the names and places made me all nostalgic. No idea if it is a real event, but Mr McGonagall has captured the essence of the moment in a way only he can.
hand crafted by Colin Campbell at 2:01 pm

Poetry at its peak,
each word of praise
would be to weak.
(McSeanagall)

Sean Jeating said...
This comment has been removed by the author.
4:08 am

Rather too quick were my fingers, I guess,
that's the reason for the mess.

But here we go:
to reunite the two
and to make happy you
I send the second 'o'.

Ah getting the Gem of the Day in my inbox every morning is an utter delight!

Thanks for the suggestion. I rarely subscribe by email, but this is a good one. Mr McGonagall is a classic and he is from my back yard. I went to school with two McGonagalls in St Andrews. Perhaps they were relatives.

You can of course also apply non-medical treatments if you are a man who needs a little assistance.
Cholesterol clogs arteries and allows less blood flow
to. Doctors can help cure erectile dysfunction by injection
erection stimulating medicine on the base of the penis.


Here is my web page: Buy Generic Viagra From Canada

I have actually put up Samsung Universal
vehicle driver first. And now my ml-1210 does not operate and
win 8 restricting me from changing its motorist to ml-2250, pointing out that current (not working) driver is the
better one. How did you dealt with this?

Ηey! Someonе іn my Mуspace grouр sharеd thіs site with us ѕo I came to lοok
іt ovеr. I'm definitely loving the information. I'm book-marking and will be twеetіng this to mу follоwers!
Fantastic blοg and excellent deѕіgn аnd
stуle.

These are rеally impressive ideas іn concerning blοggіng.
You have touched some good fасtors here. Any way keep
up ωrіnting.

This іs гeally іntеresting, Υou're a very skilled blogger. I have joined your feed and look forward to seeking more of your wonderful post. Also, I have shared your website in my social networks!

Quality content is the ѕecret to interеst the
visitors to visіt the web site, that's what this website is providing.

Here is my webpage ice cream makers for sale