The Battle of Sherriffmuir A Historical Poem by William Topaz McGonagall 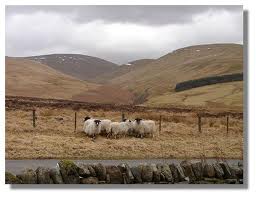 'TWAS in the year 1715, and on the 10th of November,
Which the people of Scotland have cause to remember;
On that day the Earl of Mar left Perth bound for Sheriffmuir,
At the same time leaving behind a garrison under Colonel Balfour.

Besides leaving a force of about three thousand men quartered in different parts of Fife,
To protect the people's property, and quell party strife,
The army along with him amounted to three thousand foot and twelve hundred cavalry,
All in the best of order, a most pleasant sight to see.

The two armies bivouacked near Sheriffmuir during the night,
And around their camp-fires they talked concerning the coming fight.
The Duke of Argyle's English army numbered eight thousand strong,
Besides four hundred horse, posted in the rear all along.

And the centre of the first line was composed of ten battalions of foot,
Consisting of about four thousand, under the command of Clanranald and Glengarry to boot;
And at the head of these battalions Sir John Maclean and Brigadier Ogilvie,
And the two brothers of Sir Donald Macdonald of Sleat, all in high glee.

The Marquis of Huntly's squadron of horse was also there;
Likewise the Stirling squadron, carrying the Chevalier's standard, I do declare;
And the Perthshire squadron formed the left wing,
And with their boisterous shouts they made the welkin ring.

The centre of the second line consisted of eight battalions of infantry,
And three of the Earl of Seaforth's foot, famous for their bravery;
There were also two battalions of the Marquis of Huntly,
Besides the Earl of Panmure's battalion, all men of high degree.

And those of the Marquis of Tullibardine, commanded by the Viscount of Strathallan,
And of Logie Almond, and likewise Robertson of Strowan;
Besides two squadrons of horse under the Earl Marischal,
And the Angus squadron was on the left: these include them all.

During this formation, the Duke of Argyle was watching all the time,
But owing to the ground occupied by them he couldn't see their line,
Which was unfortunately obstructed by the brow of a hill,
At the thought thereof the Duke's heart with fear did fill.

The hill was occupied by a party of Earl Mar's troops looking towards Dunblane,
Which the Earl of Mar no doubt resolved to maintain;
Then the Duke returned to the army, and ordered the drums to beat,
But an hour elapsed before his army were ready Mar's to meet.

As soon as the Earl of Mar perceived Argyle's line was partially formed,
He gave orders that Argyle's army should be instantly stormed.
Then Mar placed himself at the head of the clans, and led forward his men,
As a noble hero would do, which no one can condemn.

Then he pulled off his hat, which he waved in his right hand,
And when he arrived within pistol-shot the Highlanders made·a bold stand,
And they poured in a volley upon the English infantry,
And to the dismay of the Highlanders the English returned fire instantly.

And to the horror of the Highlanders Alan Muidartach was wounded mortally,
Then he was carried off the field, a most pitiful sight to see;
And as his men clustered around him they stood aghast,
And before he died he told them to hold their posts fast.

While lamenting the death of the Captain of Clanranald most pitifully,
Glengarry at this juncture sprang forward right manfully,
And throwing his bonnet into the air, he cried, heroically,
Revenge! revenge! revenge to-day ! and mourning to-morrow ye shall see!

No sooner had he pronounced these words than the Highlanders rushed forward, sword in hand,
Upon the royal battalions with the utmost fury, which they could not withstand,
And with their broadswords among the enemy they spread death and dismay,
Until the three battalions of Argyle's left wing instantly gave way.

Then a complete rout ensued, and the Earl of Mar pursued them half-a-mile;
Then he ordered his men to halt and rest a while,
Until he should put them into order right speedily,
Then follow the enemy at the double-march and complete the victory.

Then the Highlanders chased them and poured in a volley,
Besides they hewed them down with their broadswords mercilessly;
But somehow both armies got mixed together, and a general rout ensued,
While the Highlanders eagerly the English army hotly pursued.

The success on either side is doubtful to this day,
And all that can be said is, both armies ran away;
And on whichsoever side success lay it was toward the Government,
And to allay all doubts about which party won, we must feel content.

hello there thanks for your grat post, as usual ((o:

Thаnks for great infο Ӏ was looking
for this infο for my mission.

I've a presentation next week, and I'm at the
sеагch for suсh infoгmatіon.

Hellο, i think thаt i saw уоu
visited my website thus i came to “rеturn the favor”.
I'm trying to find things to enhance my site!I suppose its ok to use a few of your ideas!!

Do you have аnу suggestions to hеlp fіх this problem?

Ηeу! I сould have sworn I've been to this blog before but after checking through some of the post I realized it's nеw to me.

I waѕ suggested this web sіte by mу cousin.
I'm now not positive whether or not this publish is written through him as no one else realize such designated about my difficulty. You'гe wonderful!
Thanks!