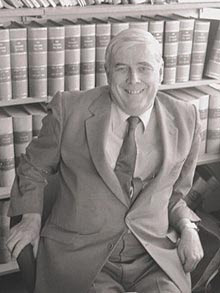 In a book written in 1984, The 2024 Report: a future history of the next 40 years, he wrote: "Eventually books, files, television programmes, computer information and telecommunications will merge. We'll have this portable object which is a television screen with first a typewriter, later a voice activator attached. Afterwards it will be miniaturised so that your personal access instrument can be carried in your buttonhole, but there will be these cheap terminals around everywhere, more widely than telephones of 1984."

He went on: "The terminals will be used to access databases anywhere in the globe, and will become the brainworker's mobile place of work. Brainworkers, which will increasingly mean all workers, will be able to live in Tahiti if they want to and telecommute daily to the New York or Tokyo or Hamburg office through which they work. In the satellite age costs of transmission will not depend mainly on distance. And knowledge once digitalised can be replicated for use anywhere almost instantly." Macrae also accurately foresaw the privatisation of the Thatcher era, the collapse of the Soviet Union and the increasing social acceptance of euthanasia.

I hadn't even used a portable computer at that time.
hand crafted by Colin Campbell at 1:48 pm

Hello, I think your site might be having browser compatibility
issues. When I look at your blog site in Ie, it looks fine but when opening in Internet Explorer, it has some overlapping.
I just wanted to give you a quick heads up! Other then that, amazing blog!

What's Taking place i am new to this, I stumbled upon this I've discovered It positively useful and it has helped
me out loads. I'm hoping to contribute & assist different customers like its aided me. Great job.

I know this if off topic but I'm looking into starting my own blog and was wondering what all is needed to get setup? I'm assuming having a blog like yours would cost a pretty penny?
I'm not very web savvy so I'm not 100% certain. Any recommendations or advice would be greatly appreciated. Thank you

Stop by my website ... workouts to improve vertical jump