A wonderful video summary from Dan Chung and Xiaoli Wang, of the Guardian, above, boils the many hours of the parade into four minutes -- and conveys the dramatic shift from tanks-and-missiles, to Mardi Gras/County Fair, at about time 1:55 of the clip.

As I mentioned in real time while watching the 60th anniversary festivities from Beijing on middle-of-the-night Chinese language TV, the whole event was a surprising relief. It had been shaping up ahead of time as a mammoth and imposing display of military hardware. The hardware and missiles were there -- but there was, to put it mildly, a lot of other stuff too.

As anyone watching in real time can attest, the appearance of this troupe was the first time that Hu Jintao, from the reviewing stand, broke into anything that looked like a relaxed expression: 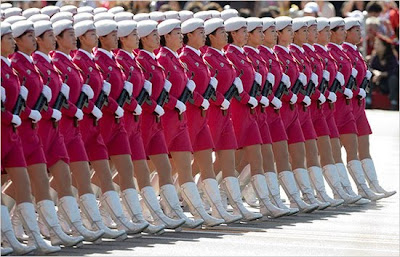 What this picture (by Diego Azubel / European Pressphoto Agency) tragically doesn't convey is that members of scarlet-miniskirted division were actually goose-stepping.


A lot more attractive than those 70s Russian Commie Parades.

Posted via web from poobumwee's posterous

Am I alone in finding the uniforms quite fetching?

I'll get me coat!