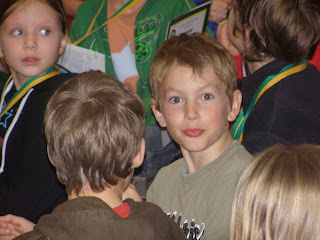 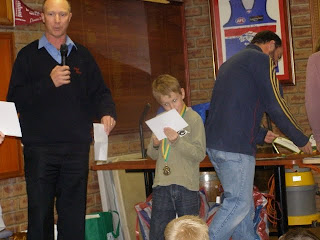 Playing sports is one thing, but getting an award at the end of the season is just as much fun. Ryan actually played on a winning team (well they won two games),  having lost all his games last year. It was amazing how great he felt after all those losses. He played for another school this year because of lack of numbers at his school. He was one of the youngest, but still had a good time and improved his soccer skills.

hand crafted by Colin Campbell at 2:25 am

Congratulations to Ryan. I hope he got to finish his matches.. I tended to be sent off when I played!

Ah soccer, I remember those days well. Rainy season here for us so getting drenched on the sidelines and then taking a muddy kid home to put in the bath to warm up again. Luckily there was no girls' soccer in our day so we only had to do it with one, but there was twelve years of it.

soccer is getting more following here in the states, which is good. i see a lot of kids playing every weekend.

what a cutie, future Beckham?

That's a great achievement for someone so small. Keep up the good work boy! :)

All power to Ryan for managing to enjoy games even if his team loses. But admit that I'm a bad loser... but, then, it's not everyone who's been in a team that lost 10-0 on a cold winter's day, right? ;(

Congratulations to Ryan on a great soccer season! My Photo Hunt entry this week is about soccer as well.

Congratulations to Ryan!
What an adorable face!

Look at how big his eyes are!

It is amazing how good a kid feels after winning, isn't it? Wonderful for the spirit!