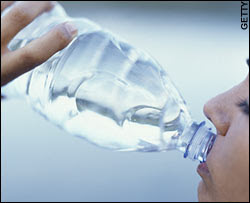 Apparently the UK Government is comparing bottled water to cigarettes as an immoral cancer on society.

Drinking bottled water should be made as unfashionable as smoking, according to a government adviser.

"We have to make people think that it's unfashionable just as we have with smoking. We need a similar campaign to convince people that this is wrong," said Tim Lang, the Government's naural resources commissioner.

Phil Woolas, the environment minister, added that the amount of money spent on mineral water "borders on being morally unacceptable".

Their comments come as new research shows that drinking a bottle of water has the same impact on the environment as driving a car for a kilometre. Conservation groups and water providers have started a campaign against the £2 billion industry.

This is utter bollocks. Cigarettes kill and maim millions of people worldwide. I am not sure the same could be said of bottled water. I live in a hot place and from time to time I think it is reasonable to be able to buy some safe and cool refreshment. Are we supposed to drink Coke? Seems to me that the carbon footprint of flavoured water and fizzy water will be even higher.

Another one of those please move to a cave and stop living philosophies from our glorious leaders. Get back to your chauffeur driven carbon emitting limousine and leave us alone.

Thanks.
hand crafted by Colin Campbell at 4:54 pm

Taking your own water with you is even better though.

I do find it objectionable to pay $2 or $3 for under a litre of bottled water.

And ignoring carbon, the amount of water used to make a 1 litre water bottle is 2 litres. So the 1 litre bottle of water, full, used 3 litres to get in your hands.

For an emergency, fine. For regular consumption, its immoral and silly.

Although I'd agree that comparing it to cigarettes is overstating it by a long way, if you saw the mountains of bottled water the French get through you might think they were overdoing it! It's becoming silly in the UK too - a trendy thing to do.

Some people argue that their water doesn't taste nice - well they can filter it, and keep it in the fridge.

I love London water, and only buy bottled if I'm out and about and need something cool and unfizzy to drink.

I think some people are taking it too far when they buy bottles and bottles of water for everyday drinking.

So I think it's ok for the government to make people aware, and encourage drinking tap water.. and in restaurants as they always grossly overprice bottled water..

The reason bottled water is considered environmentally objectionable is that tap water is seen as a perfectly adequate and safe substitute. When cola and beer flow from municipally provisioned taps in your house, then bottled sodas and beer will come to be seen as environmentally disparaged, too.