Who Knew Humpty Dumpty was a 15th Century Cannon? 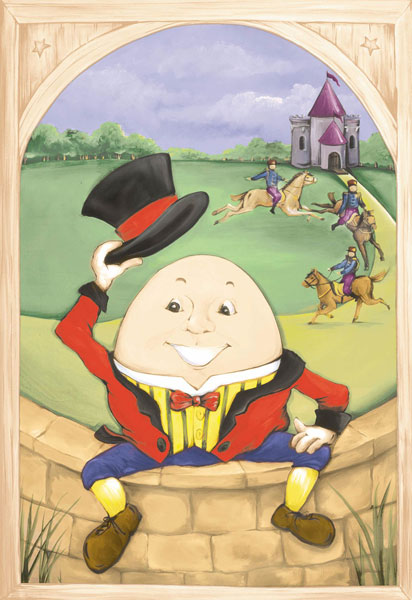 Humpty Dumpty sat on a wall.
Humpty Dumpty had a great fall.
All the king’s horses
and all the King’s men
couldn’t put Humpty together again

Humpty Dumpty was in fact an unusually large canon which was mounted on the protective wall of "St. Mary's Wall Church" in Colchester, England. It was intended to protect the Parliamentarian stronghold of Colchester which was in the temporarily in control of the Royalists during the period of English history, described as the English Civil War ( 1642 - 1649).

A shot from a Parliamentary canon succeeded in damaging the wall underneath Humpty Dumpty causing the canon to fall to the ground. The Royalists 'all the King's men' attempted to raise Humpty Dumpty on to another part of the wall but even with the help of ' all the King's horses' failed in their task and Colchester fell to the Parliamentarians after a siege lasting eleven weeks.
hand crafted by Colin Campbell at 3:34 pm

Well, I wish I'd known that when I was a nursery teacher, we could have had a Humpty Dumpty Day or something and made cardboard cannons and walls.

This is very educational content and written well for a change. It's nice to see that some people still understand how to write a quality post.!

I've learn a few just right stuff here. Certainly worth bookmarking for revisiting. I wonder how so much attempt you place to create any such magnificent informative web site.

Does your site have a contact page? I'm having problems locating it but, I'd like to
send you an email. I've got some recommendations for your blog you might be interested in hearing. Either way, great website and I look forward to seeing it improve over time.

Here is my page - diets that really work