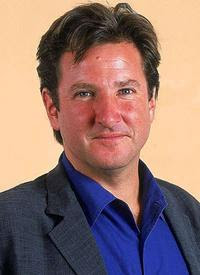 Important issues such as whether Mark "GQ" Nicholas passes the mark as lead cricket presenter for Channel 9 here in Australia. I had to look up unctuous, but it would be hard to describe him better. Australia would have to be nine wickets down with 50 runs to get in the last two overs of a one day match for Nicholas to call the match as "in the balance".

I always thought it was a bit odd having the most polished pommy accent being the main media cheerleader for the Aussie Cricket Team on television. Sort of Richie Benaud, who was the voice of television cricket for me when I grew up, with a lot less class. That said, the resident Brit on the ABC Radio commentary is Peter Roebuck, who, more knowledegable, is still very annoying. He only has a cameo role however.

This person knows how to gauge Aussie opinion on this one. Not saying he is biased, but I have to agree with a lot of it. Aussies are passionate about the cricket team, but I doubt that they are looking for a cheer squad of one to state the bleedin' obvious. Insincerity does not go down too well here.
hand crafted by Colin Campbell at 12:15 am

I prefer to call it sucking up.

Im watching the Alan Border Medal, which Nicolas is hosting, and he seems drunk, some of his comments have been a little wide of the mark. I have always seen him as a bit of a twat, but going on about 'the crumpet here tonight' doesn't speak volumes for his level of class. He didn't toat the winners either. He has a glib, grandstanding manner, a bit like a tv evangelist or a washed up game show host. So I guess you could say I'm not a huge fan.

He didn't seem drunk to me just camp as a row of tents and again this year (2009) how many gay references were there? Mark Nicholas influence I wonder?

Hi are using Wordpress for your site platform?
I'm new to the blog world but I'm trying to get started and create my own.
Do you need any coding knowledge to make your own blog?
Any help would be really appreciated!