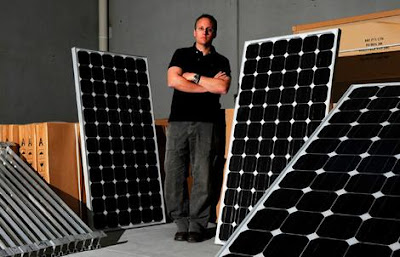 Who would have thought that a Howard Government Renewable Energy programme would be so successful that the Rudd Government are proposing to throttle it, such that it becomes non viable for many users, potentially putting many businesses up against it after gearing up to implement solar power on peoples houses. Mind boggling.

The solar power industry is predicting a dramatic decline in people installing solar panels, causing millions of dollars in lost business and job losses, after the Federal Government made it harder for households to receive an $8000 rebate.

Environment Minister Peter Garrett announced in the budget that only households earning less than $100,000 would qualify for the rebate, effective immediately.

It follows a surge in applications — up to seven times more a week, businesses say — since the Howard government doubled the rebate from $4000 to $8000 a year ago.

Clearly this is a budget management exercise rather than sensible public policy. If the government wants to promote the development of renewable energy then some combination of lowering the bar for people who want to do the right thing and increasing the tariff that homeowners can get to recover the cost of the system quicker and to promote measures to reduce demand particularly during peak periods.

"It would appear they are thinking of the rebate as middle-class welfare," he said. "What we need is to massively move to renewable energy. You can debate whether panels on roofs are the best way to go, but they are certainly a very public symbol of the move."

We looked into this for our new house. South Australia has the perfect climate for these systems. It would have been a stretch for us, but we were interested in doing the right thing. In the end we decided to reduce our monthly mortgage payment by making a larger deposit. The economics were very weighted to paying down the mortgage rather than supporting renewable energy. That would be even more so with the increase in interest rates since we bought our home.

The growth of many of the franchises built around these rebates will be brought to a very rapid halt. So much for building new capabilities, tackling a global and local issue.

Baffling. Come on Mr Garrett, The Beds are Burning!

hand crafted by Colin Campbell at 12:14 am

Such is politics. Bay of Pigs, Solar heating, it all comes down to which way the wind is blowing at that exact moment in time. At least with this one nobody is dying. That makes a change for governments.

Wonder how much these solar systems cost to install. I guess what Peter Garrett is getting at would be those earning over $100,000 could afford to pay for it themselves but I think they should give them some incentive for doing so anyways.

A basic system that we looked at was around 15k to 20k. Easy to spend 30k. Very long pay off and a large chunk of cash up front. I think many people earning less than 100k would find much more useful things to spend that kind of money on.

This is madness.
If they'd increased the rebate, in the long run they would be securing a renewable energy source for more of the population thereby decreasing reliance on fossil fuels and the need for further coal mines and power stations.
This just cements people's use of fossil fuels even more, making a lie of their climate change policies.

So instead of just reducing their costs, which is the purpose of this exercise since it was so successful, they bring the whole thing to a halt. I've always thought Australia was ideal for this and in fact my father-in-law did it on his house in the mid sixties. I'm sure the technology is so much better now but it does sound very costly.

There is no doubt that it works. Australia sold all the rights to most of the technology and it is manufactured in Germany and imported. The technology is very good. It is just a question of how to amortise the cost.

Hey Ι know this is off tοpic but I was wondering іf
you knew of anу wіdgets I сould add tο my blog thаt automaticаlly tweet my nеwest twitter updates.
I've been looking for a plug-in like this for quite some time and was hoping maybe you would have some experience with something like this. Please let me know if you run into anything. I truly enjoy reading your blog and I look forward to your new updates.

I do not drop many responsеѕ, but i did
ѕome searching and wοunԁ uр
here "Sun Sets on Solar Rebate". And I dο havе a couple of questіonѕ for уοu
if you don't mind. Could it be only me or does it look as if like a few of the comments come across like they are coming from brain dead folks? :-P And, if you are posting at additional online sites, I'd like to
follow anything fresh you hаvе to pοѕt.
Could you make a list of evегy оnе of уour communіty ѕites likе youг linkedin pгofile, Facebοok рage or twіtteг feed?

Increasingly people are adopting this strategy which they're getting quite very simple to practice.

Here is my web site - Prnewswire.Com

Automobile Enginuity is also obtainable in other languages, these kinds
of as German, Spanish and Japanese. Link your scanner to the diagnostic knowledge
relationship.