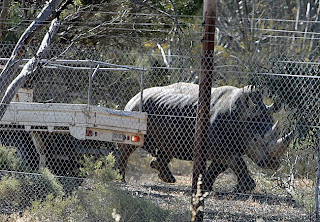 And so would you if your partner had been paired up with a younger rival.


Monarto Zoo senior curator Peter Clark said he believed the escape occurred because a younger male rhino had been paired with the female, Yhura. He said Satara had "got wind of" this. "I think he got a bit jealous," he said.

Two tonne Rhinos, just like humans. Apparently he is back in his mud pond cooling off this morning.

Monarto is part of Adelaide Zoo, located in the Adelaide Hills and is part of the worldwide rhino breeding programme. Rhino horns are considered aphrodisiacs. Perhaps Satara bit off more than he could chew.

hand crafted by Colin Campbell at 7:24 am

Oh that is kind of sad.....and how sad am I for thinking it but it so ..makes me want to give poor Satara a hug (except that would be madness). Has the Zoo no empathy chip for how these poor animals feel in situations like that. I hope Satara enjoyed his escape at some raunchy strip club and knocked back a few before being recaptured...

they've got one a bit like that at Chester Zoo too.

Check out my blog; leads for lawyers
Also visit my site ; attorney leads