Smiley in the Sky 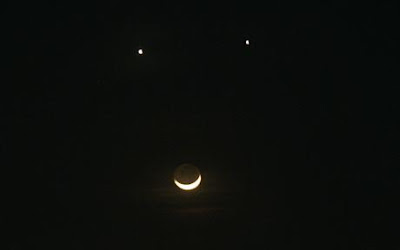 The last two nights in our neighbourhood have been enlivened by clear skies and the presence of a crescent moon, Venus and Jupiter. On Monday night it was a smiley face and last night it was an upside down sad face.

The three celestial objects come together from time to time, but often they are too close to the sun or unite at a time when they are less visible.

The next time the three will be as close and visible as this week will be Nov 18, 2052, according to Jack Horkheimer, director of the Miami Space Transit Planetarium.

I tried to take a picture, but my lame camera did not support my efforts to document the event. Still it was fun to see.

hand crafted by Colin Campbell at 7:52 am

Nor mine, camera that is but tonight they were farther apart with clouds in between. Did you see the skylab go over? Last week sometime I think.

I love the thought of a smiley face in the sky. Thank you.

A smiley face in the sky and I missed it. I'll be 100 by the time the next one comes around. I'd better make a not in my diary so I don't miss it again, cos I sure as heck won't be around for the one after that.

Hi, constantly i used to check weblog posts here early in the
break of day, for the reason that i enjoy to gain knowledge of more and more.

Greetings! I've been following your web site for a long time now and finally got the courage to go ahead and give you a shout out from Houston Texas! Just wanted to say keep up the fantastic work!

Feel free to visit my web site ... how to file for bankruptcy in florida

Simply want to say your article is as surprising.
The clarity in your post is just spectacular and i could assume you're an expert on this subject. Well with your permission let me to grab your RSS feed to keep up to date with forthcoming post. Thanks a million and please continue the gratifying work.

My sis instructed me about your web site and how
great it is. She’s proper, I'm really impressed with the writing and slick design. It seems to me you’re just scratching the surface when it comes to what you'll be able to accomplish, but you’re
off to an excellent begin!

Here is my webpage having trouble getting pregnant the third time

Remarkable issues here. I am very glad to peer your article.
Thank you so much and I am taking a look forward to touch you.
Will you kindly drop me a mail?