When an Eye for an Eye Seems Fair 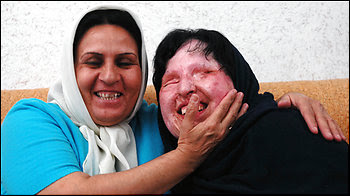 An Iranian woman is seeking a sentence for her attacker more in line with something out of a torture manual than natural justice.

Four years ago, a spurned suitor poured a bucket of sulfuric acid over her head, leaving her blind and disfigured.

Late last month, an Iranian court ordered that five drops of the same chemical be placed in each of her attacker's eyes, acceding to Bahrami's demand that he be punished according to a principle in Islamic jurisprudence that allows a victim to seek retribution for a crime. The sentence has not yet been carried out.

Seems like a very barbaric sentence, but given the crime, pretty reasonable from her perspective. Why not an acid bath?

hand crafted by Colin Campbell at 5:43 am

My gut says yea, my head says it's a grim and barbaric act.. even if the crime was ghastly

I have exactly the same feeling Jams. I don't think the world needs more horrific torture. I can empathasise with that lady however. Happy that I am not on a jury if I had to confront that decision.

Yeah, I'll echo the comments above. It's a horrendous crime, but dealing with an abominable act with another abominable act doesn't ring right with me. As for an alternative punishment? I dunno. Watching re-runs of Friends? That's torture for the eyeballs...

Measure it this way: how much sleep will you lose if they do it to him?

I go with Jams on this. Mostly because the thought of inflicting it on anyone seems horrible. The doing of it terrible

But what a wicked act in the first place. If it is carried out my sympathy will not be high for the original perpetrator.

Have you ever thought about creating an ebook or guest authoring on
other blogs? I have a blog based on the same topics you discuss and would really like to have
you share some stories/information. I know my readers would value your work.
If you are even remotely interested, feel free to shoot
me an e mail.

Here is my web blog; bowker