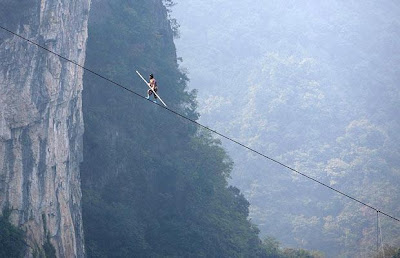 Steady as She Goes 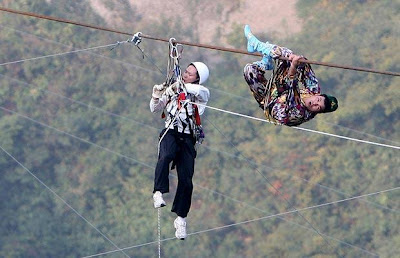 Travelling is one of the most dangerous things that we do according to researchers. This guy got lucky, but think of all those people who never made it to work in the middle ages because they were run over by a horse. Where was the horn and flashing light?

Nearly the same proportion of people died travelling in medieval times as today, with falling in ditches or being hit by a horse or cart the biggest dangers. Scientists examined coroner's records from Sussex between 1485 and 1688 when 30 per cent of people who died as a result of injury were involved in an accident while travelling on land.

Richard Havers debunks the research, but it still remains to be said, don't get out of bed and go to work if you want to be sure that you will make it through another day.

One of the cute things about Adelaide is that the radio stations still give warnings of dead kangaroos on the road, koalas crossing the road, ducks making their way through the town centre and other animals to look out for. They don't have roo bars on car for fun. A motorcyclist died last year after being hit by a large roo. If only they had radios giving out public service announcements and safety tips in the middle ages.

As for that guy in China. He got very lucky, managing to hang on to the wire until the highly organised climber dude made his way out to him and belayed him down. I have done some climbing and that is some skilfull stuff.

Next time take the train buddy.

hand crafted by Colin Campbell at 7:24 am

Wow! He surely got lucky

Oh it makes me feel giddy looking at those images. My car got hit by a kangaroo - the car was a write off as was the kangaroo.

Oh my. That's what you call the Chinese Luck!

You need to tell him about wi-fi !!

It's an awesome paragraph designed for all the web viewers; they will get advantage from it I am sure.

Review my homepage; such a good point

Usually I don't read post on blogs, however I wish to say that this write-up very pressured me to take a look at and do so! Your writing taste has been surprised me. Thanks, quite nice article.

I've got some recommendations for your blog you might be interested in hearing. Either way, great blog and I look forward to seeing it improve over time.

I'm curious to find out what blog system you have been using? I'm having some small
security issues with my latest site and I would
like to find something more secure. Do you have any recommendations?

Hi there, after reading this amazing piece of writing i am as well
cheerful to share my knowledge here with mates.