Snake Charmer Rudd to the Rescue

President Kevin Rudd today announced the Department of Economic Stimulus with massive handouts to Labor core voters to see them through until he goes to the vote in a couple of years. The blame game has started early and it is probably a sound plan to shore up the Labor vote before the economy tanks.

Prime Minister Kevin Rudd today blamed "extreme capitalism" for the global crisis and said the seed for the economic meltdown was sewn in the United States' reaction to the bursting of the dotcom bubble at the beginning of the decade. 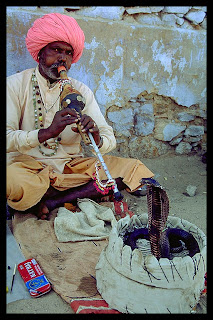 An mystic economic forecaster, who will be taking an office next to Rudd, has been appointed to divine the path of the economy going forward. We believe that it is a prudent measure to keep control of the snakes who got us into this mess in the first place, the PM said.

The Member for Wentworth and former extreme capitalist, supported the government, pending a change in public perception on the World Economic Collapse. We are evaluating whether water diviners would be able to foresee the future better, he said.