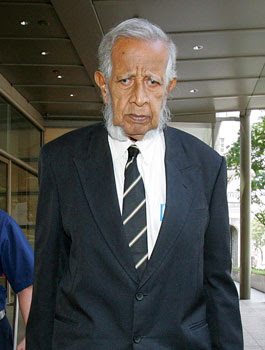 Saddened by the passing of the tormentor of the PAP in Singapore and crusader for democracy in that most autocratic of countries, JB Jeyeratnum. Despite being hounded out of parliament numerous times using the favourite PAP tactic of fear, intimidation, libel and bankruptcy of those who dare to oppose, he fought for what he believed right to the end. Having cleared his bankruptcy, he had established a new political party and was seeking to reenter parliament.

Most Singaporeans are too scared to say anything or do anything for fear of retaliation. This is a country where the government really does control everything. JB Jeyeratnum showed that it was possible, despite many obstacles to do something.

"It would be terribly funny if it weren't tragic for me," he said in an interview at the time. "A lot of people tell me: 'Why do you carry on? It's hopeless in this place. Why do you sacrifice yourself, suffering all this pain?' Not that I suffer that much."

During my last few months in Singapore I saw him sitting quietly in a bar in Bugis just after being declared bankrupt and kicked out of parliament. I wanted to say something, but left him to his thoughts.

It takes a lot of inner and moral strength to take on an entrenched autocracy like that. Not unlike Morgan Tsangari in Zimbabwe.

He may not be featured much in the government controlled press or in history books, but his memory and what he stood for will be difficult to forget for most Singaporeans.

hand crafted by Colin Campbell at 7:51 am

He looks a bit like that American settler with the pitchfork

Thanks for sharing, Colin.
Can't judge, however in the way you describe his personality, MR. Jeyaretnam seems to have been one of those remarkable characters one would find but a few in any country with a supressed and intimited people.

Sean Jeating said...
This comment has been removed by the author.
7:59 am

Trying again, without a further typo:
And here's the missing 'r'. :)