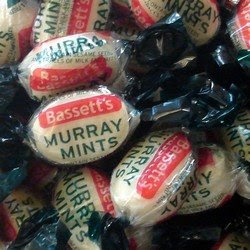 Marcus Trescothick spills the beans on Englands clever tricks and secret plans to thwart the all conquering Aussies in 2005.

England batsman Marcus Trescothick claims in his recently released autobiography that it was his job to shine the ball and he sucked a special brand of mints for the purpose. Trescothick admits in the book he even experimented until he found the right brand of mint.

"I had a go at Murray Mints and found they worked a treat.''

Obviously they don't sell them in Australia if their trip last year is anything to go by.

And Marcus, he looked like such a nice boy.

hand crafted by Colin Campbell at 6:39 am

This is a joke surely?

The medja suggests that he will spill the sweeties in his autobiography which is referenced in the link.