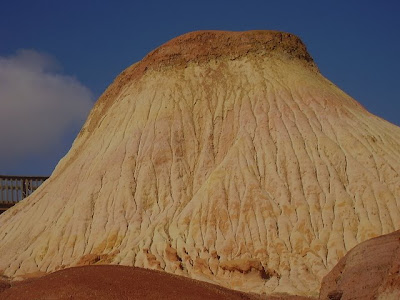 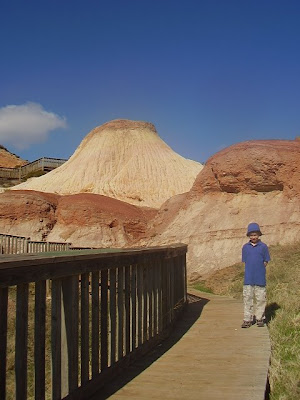 A wrinkled geomorphic landform called the Sugar Loaf from Hallett Cove Conservation Park, south of Adelaide and close to where we live. Ryan went with his Joey Scout mob to take a look. There is a lot to see and understand in a relatively small area, with international significance for those that are interested in those sorts of things. This small area reminded me of The Badlands National Park in South Dakota, which I visited over ten years ago.

It is funny to think of Adelaide having been under ice. We could use some of that now as a water source. Hopefully I wont be as wrinkled as this, later in life.

photohunt
hand crafted by Colin Campbell at 3:01 am

Those are the first geomorphic wrinkles I have ever seen...
:)
I don't need any more facial wrinkles myself.
Happy PH and happy weekend!

Great choice for this week!!

btw - love your Olympic circles on the right of your blog! :-)

I have never seen anything like that here in the European alps! Very interesting post.
Happy weekend.

That is a great view of this wrinkly site! Cool...
It does remind me of parts of the Southwest of the US..

Those are beautiful shots. I think the are very attractive wrinkles.

Definitely an interesting shot! This is the first I have heard of this place, and it always nice to learn something new :) Have a great weekend!

That first shot is very interesting! And huge wrinkled photo too:)

That looks my me first thing in the morning ...

I've never seen geomorphic wrinkles before. I, too, hope I fare better in my old age! lol

Do you know, that is the most unusual one I have seen this week - and I have seen a lot of them! :) Well done Colin. :)

nice take on the theme!

Now that was different and so very interesting. Geomorphic Winkles? I think I already have them..LOL

Great choice for today's theme... Mine's up too , hope you can hop at corner too... Happy weekend!

Great choice for today's theme... Mine's up too , hope you can hop at corner too... Happy weekend!

Wow - now that is a great find for the theme! Talk about wrinkled!

"...and this is what you'll look like if you forget to religiously apply our latest anti-wrinkle formula that contains the secret ingredient - Himalayan Yak Toe-nail clippings"

wow, what a fascinating wrinkled landform :)

No escaping them Laddie. This is a different take and looks like an interesting place.

What a unique entry f0r today!

Great take for the theme. It is so natural.

Those are beautiful shots and very cool besides. Great entry for the theme this week!

My first thought on seeing the picture is that it looks a bit like the Badlands. Great wrinkles!

Very majestic wrinkles you got there! Beautiful shots! :)

What an interesting and original Wrinkled idea! Thanks for sharing and hope Adelaide gets more rain soon.

I think it is interesting that if you had cropped to just the wrinkles it would likely have looked similar to my entry, lol. Both from nature but so different in size and composition.

Baker
(Thanks for the visit and the kind comments)

Very unusual, at first glance I thought it was a camels hump!

A wrinkled landform called Sugar Loaf. How interesting! I got to see this when I go to Adelaide. :)