The Secret to Michael Phelps Success 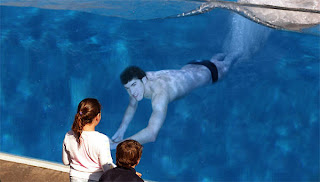 ORLANDO—Fourteen-time Olympic gold medalist and SeaWorld main attraction Michael Phelps returned to his seven-million-gallon water tank Wednesday to resume his normal schedule of performing in six shows a day for marine park crowds every day of the week.
Phelps, the 6'4", 200-pound aquatic mammal, and the first ever SeaWorld swimmer to be raised in captivity by foster swimmers (Mark Spitz and Dara Torres), was recaptured by trainer Bob Bowman in a hoop net baited with an entire Dutch apple pie following Phelps' final Olympic event last Sunday.

My former company designed the waste management system for all the aquatic systems at Sea World. I wonder if they factored in human poo.

hand crafted by Colin Campbell at 1:43 am