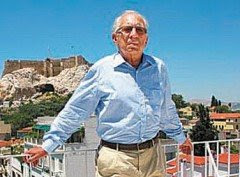 Sounds Greek to Me

Residents of the Aegean island of Lesbos were taking legal action in Athens in an attempt to stop homosexual women calling themselves lesbians. Islander Dimitris Lambrou and his neighbours claimed gay women had usurped a term they feel should have only geographic connotations. They lost their case but the battle apparently still rages, particularly around Eressos, a resort on the island thatis famed as the birthplace of the 7th-century BC poet Sappho. A guaranteed winner in the stoush, Maria Variyianni, a Lesbian lesbian who boasts: "I am two in one ... and I'm proud to say it publicly."

The wonders of the English language.

And Batman, Turkey officials are open to using legal avenues to grease their palms.

hand crafted by Colin Campbell at 12:30 am

'I am two in one' - WOW. I am simply speechless. But wouldnt that make her bi something or other?