Aussie Citizenship Test on the way 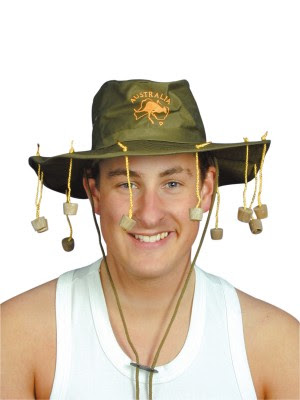 If I decide to become a fully fledged Aussie some time in the future, I may have to take a Citizenship Test if El Presidente Howard has his way.

This is all red flag code for shoring up white Australian support and anti muslim sentiment running into the next election.

Australia is a highly successful multicultural society with more than 6 million migrants since World War II successfully integrating generations of migrants into the community. The citizenship requirements of two years' permanent residence, basic English and a public pledge to Australia and its laws and democracy seem to have worked well.

The test will be 30 multiple-choice questions drawn from up to 200 possible questions, with subjects including:

Loving to beat the Poms at Cricket

The Right to Slip Slap Slop

The Right to play football with a Rugby Ball

The Right to own and use Vegemite

Making sure children wear a hat in the sun

Knowing the names of the Bananas in Pyjamas

How the white man came to Australia, stole the native Australians land and never having to say that you are sorry.

■Australia's system of government, including the three elements of federal Parliament: the Queen and her representative, the Governor-General; the House of Representatives and the Senate.

Australias system of government united under one God the Liberal Party under the leadership of his Excellency John Howard.

■How laws are made and administered and the rights of citizens.

John Howard decrees and so it came to be.

I'm off to to the pub to start studying now.

My question is how many Australians would do well in this test and if they fail, are they tossed out?

Perhaps they can learn from the British Experience.

hand crafted by Colin Campbell at 7:36 am

If it's done properly, I think it's necessary. Although I agree with you the reasons behind it are not all altruistic.