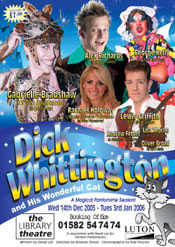 One of the things that I miss around this time of the year, especially now that we have kids, is The Pantomime.

We used to go to see Puss in Boots, Aladdin, Snow White and other likely characters. The cheezier the jokes and the songs, the better. Generally there is also at least a few contemporary adult jokes.

Pantomimes are a tradition throughout the UK over the Christmas Holidays. Containing both good and evil characters, the English Pantomime descended from Commedia Dell'Arte, a form of comedy popular in Italy between the 16th-17th century which later spread throughout western Europe and finally arrived in London in a slightly different form.

So roll on the day when I can take the kids and join in with the booing and the hissing.
hand crafted by Colin Campbell at 12:53 pm