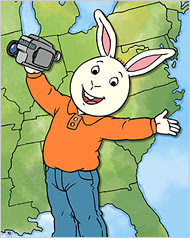 From the New York Times

Arthur's friend Buster is getting into trouble for showcasing alternative lifestyles, making American Conservatives mad and threatening a second series.

In “Postcards From Buster” documentary footage of children from different cultures is combined with animation of Buster and his friends. This season includes only 10 episodes, which began in November and will run through February, a far cry from the 40 produced for the show’s first season.

Children first came to know Buster Baxter, the animated bunny who is the show’s star, as the best friend of Arthur, the animated aardvark who is the title character of another PBS series. But Buster became better known midway into the show’s first season, when word got out that an episode about maple sugaring, called “Sugartime!,” would feature children in a Vermont family with two moms.

Play School got into trouble here in Australia for pretty much the same thing. With more and more families not resembling the one dad and one mum model, so beloved of conservatives, I think that it is fair enough that alternative ways of living are show cased in children's entertainment. I mean the show wasn't about their personal life, it was about making Maple Syrup. Scary stuff.

hand crafted by Colin Campbell at 5:47 am