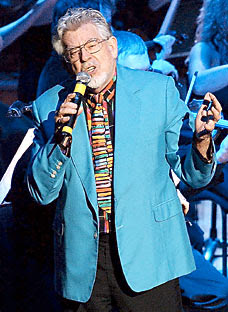 From This is London

Rolf Harris has apologised for using racist language in Tie Me Kangaroo Down, Sport - the hit song that launched his career.

The original words he wrote for the 1960 hit - sung to the accompaniment of his famous wobbleboard - included a verse referring to Aboriginal workers as if they were slaves.

The opening lines tell of a dying stockman giving his friends instructions on how they should treat his pet animals, such as 'keep me cockatoo cool, Curl' and 'take me koala back, Jack'. However, in the fifth verse comes a slur on Australia's indigenous population: 'Let me Abos go loose, Lou, Let me Abos go loose. They're of no further use, Lou, so let me Abos go loose.'

In an interview with Radio Scotland to be broadcast on Sunday, 76-year-old Harris admits that those lines were racist and he wished he had never written them.

Asked whether he regretted having included the verse, he said: 'Of course - dear, oh dear.' He said he now has a 'great love and respect' for Aborigines.

The song was written in 1957, when Aborigines were not allowed to vote, were not counted in the census and were often indentured workers in conditions approaching servitude.

Harris later dropped the verse when re-recording the hit, with the word 'emus' substituted for 'Abos'. But today his website contains a set of lyrics with no mention of emus or 'Abos'.

I just think that he is a great entertainer. We used to love to watch his paintings develop and the wobble board on his TV show. I mean come on it was the 1960s. I can remember growing up in Scotland the Scots were some of the worst parochial racists (they still are) in the world. I don't remember reading much into the lyrics. My kids love him now. Go Rolf.

hand crafted by Colin Campbell at 8:23 am