Highlight of the Soccer Season 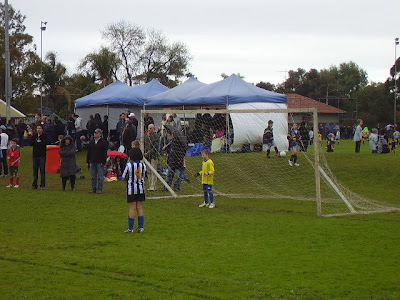 Ryan waiting for his season defining moment of glory.
Ryan's under 9 soccer team has had a memorable season for many of the wrong reasons. The highlights of the season were the one goal they scored and the penalty Ryan saved during the last game of the soccer tournament to salvage a nil all draw, the best result of the season.

Throughout their 1 to 109 goal difference, they managed to maintain their enthusiasm, despite all the negative influences of being hammered every week. They had a fun presentation ceremony with the ironic award of the day being top goal scorer medal going to the coordinators son who scored that very precious only goal of the year. They did score two others, but they were scored by players borrowed from other teams, so they don't really count.

Thanks to all the parents and coaches for making it all possible. Without all the effort, those small moments of success would not be possible. There is always next year and the knowledge that the senior team won all their games convincingly and were top of their league as an incentive for the future.

The fun part of participation is alive and well, which is the part that we value.

Ryan told me afterwards that he was disappointed that there was not a medal for best goalkeeper. Perhaps we will have to make our own trophy.

hand crafted by Colin Campbell at 8:05 am

I used to play for a team like that we used to get hammered 10 nil every week.

Only one way from there surely. Up! Parents used to cheer when they got in the other half and shots on goal were as good as a hat trick.