The Law is an Ass 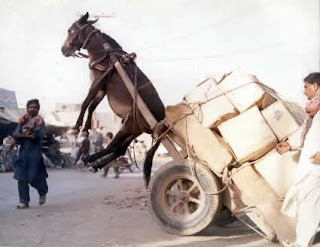 Throw his ass in jail your honour.

An Egyptian donkey has been jailed for stealing corn on the cob from a field belonging to an agricultural research institute in the Nile Delta, local media reported today.
The ass and its owner were apprehended at a police checkpoint that had been set up after the institute's director complained that someone was stealing his crops, the state-owned Al-Ahram daily said.

The unnamed ungulate was found in possession of the institute's corn and a local judge sentenced him to 24 hours in prison.

I am curious if the ass was put in solitary, what they fed it and where and how he pooed? We need to know these details.

hand crafted by Colin Campbell at 7:14 am

No doubt the donkey was sentenced to hard labour.

In the slop bucket, same as everyone I suppose.

How he pooed? Surely he would poo the same way he always does.