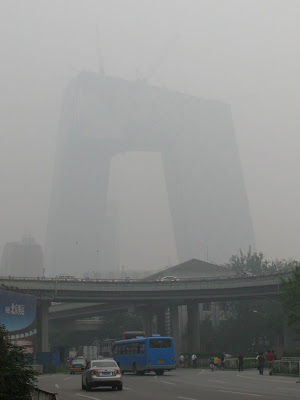 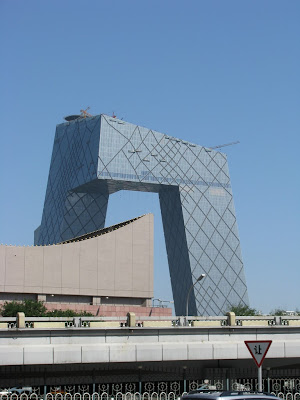 I have a slight modification to propose to the International Olympic Charter. I suggest that the Olympics, and the Paralympics, be run back-to-back, nonstop, month after month and year after year -- and always in Beijing. It could be tough on the athletes, but think of the golds they could win! And with this system, the city might continue to enjoy the phenomenal blue skies and beautiful weather that have prevailed for most of the last four weeks.

When I lived in Singapore, the skies were like this for month when the forest fires burned in Indonesia. It was depressing and dull. At least it passed. Unlikely that Beijing will have blue skies again any time soon. The economic consequences of shutting down industrial facilities will be far reaching. The environmental consequencs of turning on the smoke stacks again will be even more far reaching and the impact longer term.
hand crafted by Colin Campbell at 8:06 am

Don't forget Hong Kong! Would love to see the blue skies seen lately all the time here too!

I'm for blue skies all over.

When will people understand that the instant China does anything in a billionicate, the world suffers?

I don't know if it's just me or if everyone else experiencing issues with your website.

It appears like some of the written text in your
content are running off the screen. Can someone else please provide feedback and let me know if this is happening to them as well?
This could be a problem with my browser because I've had this happen before. Kudos

my page; The Sunset Hotel Villas