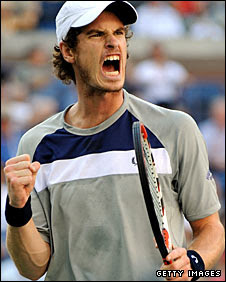 You definitely have to be Scottish to appreciate this.

Macedonia v Scotland - as it happened 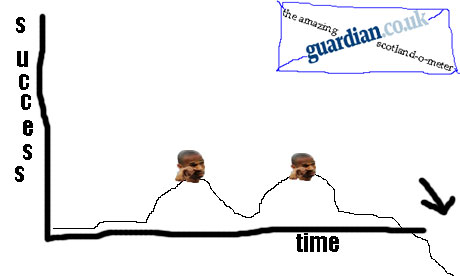 This is more than a graph than an o-meter, but I didn't have time to change it, sorry

Kick off: 2pm. Scott will be here from 1.30pm. Although he just texted in to say his train was delayed, so make that 1.47pm.

Oh how I love you, Lisa Gray, PA Sport Chief Scottish Football Writer, Skopje: "There were no real surprises in George Burley's team selection for Scotland's World Cup qualifying opener against Macedonia.
Kenny Miller and James McFadden both started and were given the task of getting the goals despite a less than inspiring partnership in last month's friendly against Northern Ireland at Hampden. With West Brom's James Morrison injured, Barry Robson was given the nod in midfield alongside Celtic team-mates Paul Hartley and Scott Brown, as well as Darren Fletcher. As expected, stand-in skipper Stephen McManus was able to shake of a knock he picked up in last week's Old Firm derby to take his place in the heart of defence with Gary Caldwell. Kirk Broadfoot was named among the substitutes after his surprise call-up earlier in the week.

The way I look at it is this: One of the Official Rules Of All Football is that Scotland are only ever any good when there is absolutely no expectation whatsoever. In fact, that's rule one. So I think it's only fair to note that the couple of wins against France in the Euro qualifiers - while wholly hilarious, mainly due to the petulant reaction of Tinyears Thierry - represented a couple of blips, rather than an upward trend that can be extrapolated to World Cup glory (see graph). Scotland have since been terrible, pretty much, so. There, if that doesn't guarantee a 6-0 win for the Scots, nothing will.

The Macedonian national anthem: Is quite an amazing piece of music. It sounds like a haunting Norwegian folk anthem, the sort of thing a young girl sings when she finds out her father isn't coming back, there's been a disaster on the whaling boat. Fantastic stuff, a genuinely moving solo turn. There's quite an atmosphere in the stadium. The atmosphere of a hospital chapel, admittedly, but an atmosphere nonetheless.

And we're off! Not much happening so far, though Gary Caldwell has already put in one reducer on Pandev. "Sometime in the 17 minutes between when you were first expected and when you actually started," begins Gavin Speirs, setting the tone, though he really wants to have a pop at First Capital Connect, not me, "bored of Jim Traynor's opinions and not interested in Craig Burley's, I noticed the qualifying table on the left of the page showing Macedonia top and Scotland bottom. Is this to set realistic expectations ahead of our dismal 2-0 defeat? Is it to give us the chance to say Kenny Miller's 53rd minute tap-in saw us beat the top team? Or has the alphabet been updated recently?" You got it right first time, Gavin. The only way is up. That's the way we like it round here.

4 min: Scotland have started steadily enough, Hartley, Brown and Fletcher seeing plenty of the ball. Ah hold on, McManus has just taken Maznov down five yards from the area. Damn. "Thanks for trying with the Official Rules, Scott," writes Billy Clark. "All was going well with that comment until you went and predicted a 6-0 win at the end of it. We're doomed. Doomed, I tell ye!"

5 min: DOOMED! Macedonia 1-0 Scotland. Well Billy Clark called that one damn straight. Sedloski hammers a low shot towards the bottom left corner which Gordon does wonderfully well to fingertip onto the post. The luck's not with him, though, the ball bouncing straight back, allowing Ilco Naumoski to sidefoot home from three or four yards. Whoosh! There goes that World Cup!

9 min: Right, the comeback is on! Scotland win a free kick 25 yards out, just to the right! Robson tries to replicate Sedloski's daisycutter... but you couldn't slice through melted butter with the weak effort he dispatches into Milosevski's arms. The comeback is not on.

Luckily there is hope in place with a trip to Iceland on Wednesday for the proverbial must win game. Hope springs eternal for the Tartan Army. From 90 degrees to 0 degrees.

Thank you for the auspicious writeup. It in fact was a amusement account it.
Look advanced to far added agreeable from you!

By the way, how can we communicate?