Ever tried to milk a Giraffe? 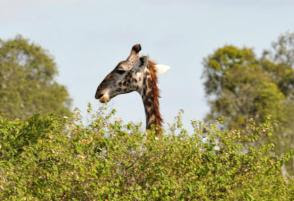 Israeli researchers have determined that giraffes are kosher for eating and drinking.

Shavuot, or the festival of the first fruits, which begins tomorrow, is traditionally a time for consuming milk products. Milk from a non-kosher animal is widely held not to coagulate or curdle.

It had already been established that giraffe meat was kosher since the giraffe, like a cow, both has a cloven hoof and is a ruminant.

Rabbi Shlomo Mafhoud, who accompanied the researchers from the Volcani Agricultural Institute, said: "The giraffe has all the signs of a ritually pure animal, and the milk that forms curds strengthened that."

Don't expect big game hunting or commercial giraffe dairies to be established to feed this market. It is theoretical rather than practical since giraffes are endangered. And does it taste any good anyway?
hand crafted by Colin Campbell at 9:15 pm

I have no idea how feasible it is but I would like to see someone try!